Bangladesh Board Class 7 Science Solution Chapter 12 “The Solar System and Our Earth”  Exercises Question and Answer by Experienced Teacher.

Fill in the blanks:-

Answer the following questions in brief:-

(1) Why did men think before that sun moves round the earth?

(2) Who told about the earth centred model?

Answer:- Aristotle a great philosopher and scientist told about the earth centred model and then famous mathematician and (astrologer Ptolemy also told it).

(3) Explain how the sun and the other starts produce heat and light.

(4) What is comet? How is its tail created? Set an example of your acquainted comet?

Answer:- The comet is a luminary which is made of solid but it is turns into gas easily when it gets heat . When comets go near the sun then it is scattered in the sky turning into gas or solid due to the heat of the sun. Then it turns into a watchable tail.

An example of my acquainted comet is Halley’s Comet.

(7) Discuss the effect of change seasons over human being.

Answer:- Due to the changes of seasons we enjoy the seasons all the year, the weather is changing in order to the seasons, different crops grow. In cold countries most of the parts remain covered with ice, but in summer season when the ice melts the man is able to grow crops.

(1) Which planet consists of ice and gas?

(2) The world which is applicable to the sun is —

Answer the question no. 3 from the table below.

(3)  The planet (that is not mentioned in the table) which has a distance of 22.8 crores km from the sun. Where is it situated?

Answer:- (d) In between Earth and Jupiter.

(a) What is diurnal motion?

Answer:- The earth takes 24 hours to rotate on its own axis from the west towards the east. The is called the earth’s Diurnal motion.

(b) Why does it rain heavily in Bangladesh in between June and July?

Answer:-  It rains heavily in Bangladesh in between June and July because there has been down pouring due to monsoon wind and the rainy season is started.

(c) When do the smallest nights and longest days occur at southern hemisphere? Explain with the figure.

Answer:- 22nd December is the smallest nights and longest days occurs at souther hemisphere. This time, a part of southern hemisphere remains facing the sun. The sun shines vertically. 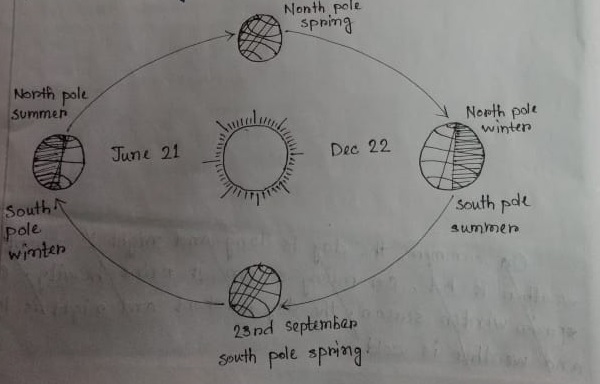